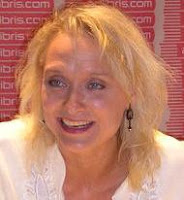 Karin Alvtegen's new psychological thriller is out now in the UK from Canongate, and it boasts her most complex plot yet. The book dissects the family of a Nobel Laureate in Literature, examining the shadow cast by a crime he committed long ago, which eventually has disastrous consequences for everyone connected to him (and even some who aren't). There's a good review here of her last book, Shame. And she has been nominated for an Edgar for an earlier one, Missing, which was recently released in the States. Great creepy stuff. [Thanks/Tack to Lennart Guldbrandsson for the photo from 2005]
Posted by Reg / Steve at 12:35 AM