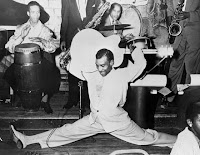 As one of the few blues fans reading my blog, Drew in Washington DC has correctly identified the musician on my shirt as T-Bone Walker, Texas bluesman and innovator of the single-string solo and other electric guitar techniques. Born Aaron Thibeaux Walker in Linden, Texas in 1910, he influenced guitar players such as B.B. King, Albert King, Freddie King, Chuck Berry, Clarence “Gatemouth” Brown, Albert Collins, and most blues, jazz and rock guitarists since. T-Bone died in 1975. He is shown playing his blonde Gibson Emperor behind his head, a technique later picked up by Jimi Hendrix and Stevie Ray Vaughan (although I've never seen them do the splits simultaneously). Drew wins a hardcover copy of The Girl Who Played with Fire.
Posted by Reg / Steve at 12:05 PM