How I learned Swedish 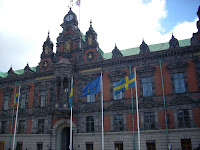 [This picture is from Malmö]

Besides the early days of going to Helsingborg [spelled Hälsingborg back in those days, can any Swede tell me why?] to buy books and eat "glass" [ice cream] and "varm korv med potatismos" [hot dogs with mashed potatoes/sausage and mash], in 1974 I discovered that there was a field called technical translation. Having always been a good student in chemistry in college, I thought I'd give it a try.

I rifled through the yellow pages in major cities across the U.S. and sent out query letters to about a hundred translation agencies. Nothing. About a year later I got a call from the Institute LanFranco in San Francisco, asking if I could translate an article from Norwegian about aluminum rolling mills. "No problem." I got the 5-page document in the mail and then read the entire article on aluminum in the Britannica, dusted off my Norwegian-English dictionary, and produced a believable article -- anyway, there were no complaints. [And this was before instant answers and diagrams on the Internet.] I think I was paid 1.5 cents per word. Wow, this wasn't so hard.

So for the next year I survived mostly by doing translation, since my previous attempts to interest publishers in avant-garde Danish fiction, and even a Danish fantasy novel about the national hero, Holger Danske, at the court of Charlemagne and fighting the Saracens, had come to naught. I hooked up with one of the best agencies in the States, AD-EX, and was soon their go-to guy for translating Swedish nuclear power documentation for an American company that was selling them reactors. This lucrative gig lasted until 1980, when in the wake of Three Mile Island, Swedish voters passed a referendum to cut back on nuclear power. End of gravy train, but by that time I was pretty freaked out about working in this "evil" industry anyway.

I had acquired some typesetting machines in 1976-77 in order to supply AD-EX with foreign-language typography for their corporate clients. Besides doing the standard Spanish, French, and German jobs for them, Arabic was big at the time because the Saudis and Gulf states were spending money like crazy with American companies. So I took an Arabic course at UC Berkeley and started doing Arabic rub-on press type for headlines on brochures. Then I bought an IBM electric typewriter that went from right to left and learned to type on the Arabic/Farsi keyboard. This was all fine as long as the copy to be "typeset" was already typed. Unfortunately what the agency received from their translators was usually handwritten. As anyone who has studied Arabic will know, the penmanship of the average writer leaves much to be desired. In fact, if you don't know the language well you have no hope of guessing what many words are.

So that's how I learned Swedish, beyond just reading novels. In addition to nuclear power, I learned lots of vocabulary from many scientific, industrial, and business fields in all 3 Nordic languages and German. I even did a 100-page book from Dutch "proving" that the probability of a nuclear meltdown in Holland was less than a 747 crashing into a stadium during the final game of the World Cup. Turns out it was all great training for doing crime fiction. How many times does a translator have to know whether the safety-relief valve will handle the proper volume of feedwater flow after a LOCA when blowing down to the pressure suppression pool without significant cavitation, anyway?