How I learned Danish 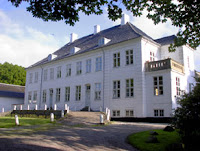 After studying Latin (why?) and German in high school, and continuing with German at Stanford, I went to the overseas campus in Beutelsbach near Stuttgart for 6 months. Coming home on a student ship (!) from Rotterdam I met a bunch of kids from San Francisco State College who'd been studying in Scandinavia. From what they told me about it, it was total immersion in the language, unlike my German experience where all the Americans lived together and had to leave on the weekend to go out and practice German in real life.

I went on the Scandinavian Seminar the next year, which was not really an "exchange" program, because nobody went the other direction. The group of about a hundred students spent a couple of weeks in intensive language training at Holbæk Højskole (featuring teachers such as poets Poul Borum and Inger Christensen -- I still recall them donning their leathers and setting off one evening on their motorcycle for Copenhagen to see the Stones -- and this was 1964) and then dispersed to live with families in the 4 Scandinavian countries, ostensibly for more language practice. Unfortunately I got sent to a farm in eastern Jutland (Hornsyld) that just wanted spare hands for the hay harvest. After a few weeks there learning the local dialect, which would come in handy later in Copenhagen, I was sent off to Krogerup Folk High School in Humlebæk to attend the most intellectual school in the whole system.

The experience of learning a language by total immersion is about as close as you can come to starting over at age 2. People treat you according to what you can say, not what you can understand (which is always much more). So for a couple of months I would go to the daily assembly and sing songs in Danish or Swedish that I barely understood, then listen to a lecture by some visiting bigwig that I understood even less. The sensation was of words literally flying "over my head." But like snowflakes they eventually started to stick, and soon I found myself dreaming in Danish -- and not understanding the words in the dream either! But my brain had duly recorded them and was playing them back.

Because I was the only one in the group who had studied German instead of languages like French or Spanish that were relatively useless in Scandinavia in those days, I picked it up faster, and in about 3 months I could pretty much figure out how to say anything in a roundabout way. My big breakthrough came when sitting around in someone's dorm room trying to tell "elephant jokes" (remember those, anyone?) in Danish. With the help of a few beers we were all cracking up at my wacky mistakes. [Hvorfor går elefanter med røde gummisko på? For at kunne skjule sig i kirsebærtræerne.]

By that time I was participating more in classes, doing book reports in Danish because my teacher in Danish class (poet Erik Knudsen) would assign me to read the English books. Always a translation nut, I started attempting to translate poems into and out of Danish. As Per Olov Enquist once wrote in Lewis resa, "Poetry differed from prose in that it had shorter sentences and was written by slackers." I recall Wallace Stevens being particularly hard, no slacker he.

And my film and Nordic literature teacher (the great Niels Jensen) was screening the best of European cinema for his class in many languages. We all trekked up to the local cinema in Espergærde one evening and had to sit through "Last Year at Marienbad" with actors that all looked like Giacometti sculptures because the theater didn't have the right lens.

Fortunately Krogerup is located right across the Sound from Helsingborg, Sweden, which was a favorite destination on Saturdays. I learned to understand spoken skånska, the southern Swedish dialect, fairly well. And then Niels Jensen started us reading books in Swedish!