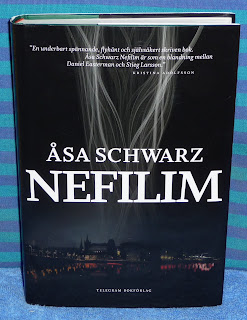 I just finished another translation from Swedish, which will be published in 2011 by Sibling Press in the UK and Australia as Nephilim.

All you vampire fans, try out something new: these fallen angels, one of whom stowed away on Noah's Ark when God was trying to wipe them out with the Flood, then interbred with humans and created a new race that has survived to the present day. The Nephilim look like us, they talk like us, they walk among us! They're trying to fight global warming to stop another flood, and begin by murdering CEOs of the worst carbon dioxide polluters in Sweden. You decide whether they're good or bad.

Åsa Schwarz has written this as a young adult novel, but like the Twilight series, adults can read it as well, and there will be more books coming.

Treat yourself to a new brand of the undead.