The title of the first book was "Men Who Hate Women."

The second one was indeed called "The Girl Who Played with Fire" when published in Sweden, although Stieg's original title was "The Girl Who Fantasized About a Gasoline Can and a Match."

Note the very modern-style dragon, much more to Lisbeth's taste than the Chinese one on the UK cover, I think.

Stieg's original title for the manuscript of #3 was roughly "The Queen in the Air Castle," which ended up being published as "The Air Castle That Was Blown Up" -- neither one really suitable for use in English.

So you can see that "The Girl..." was used originally only on the 2nd book. The titles of the French editions seem to have been taken from earlier versions of the manuscripts rather than the later books as published in Sweden, since I believe France was the first country outside Scandinavia to translate the trilogy. There will be plenty of work for literary scholars of the future to unravel the differences in all the versions and translations! 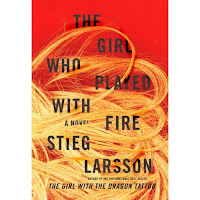 Famously tough but fair reviewer Michiko Kakutani has written a very nice review of Stieg Larsson's second in the Millennium series, The Girl Who Played with Fire, in the New York Times. Thanks, Michiko!
Posted by Reg / Steve at 12:13 PM 2 comments:

Thanks to noted novelist Diana Gabaldon, author of the bestselling Outlander series, for the extremely nice review in the Washington Post! We Southwesterners have to stick together.
Posted by Reg / Steve at 11:56 AM No comments:

Lots of shortlists for Stieg Larsson

Whew, the trip to Bristol, Copenhagen, and Norway wore me out, and I came home to a mountain of translating work. Sorry for the lack of news in a while, but in the meantime Stieg Larsson has collected a bunch of shortlist nominations, most to be decided at Bouchercon. Hope to see you in Indianapolis!

The Girl with the Dragon Tattoo is now out in both trade paperback [cover similar to hardback one shown here] and mass market [see earlier post for cover] and has been shortlisted for:

And as predicted, the Fred Vargas International Dagger went to (wait for it) Fred Vargas!