Stieg cleans up at Bouchercon 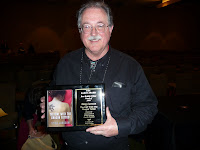 Stieg Larsson's first novel picked up 4 awards at Bouchercon in Indianapolis last week. First a Macavity Award for Best First Mystery; then a Barry Award for Best British Crime Novel of 2008 (shown in the pic above – and it didn't have to be British, just published there first). At the Anthony Awards presentation on Saturday it took one for Best Cover Design, then one for Best First Novel. Too bad I couldn't bring any of them back home with me, but at least I got a chance to say a few words to the crowd about Stieg's pro-feminist message in the Millennium trilogy and mention the website devoted to his partner Eva Gabrielsson.

Both fans and crime writers were extremely kind and enthusiastic about Stieg's work, and I received many compliments on a job well done. It was fun to meet so many people who love the books, even though the 3rd one isn't out in the States yet. But booksellers were filling that need with the imported UK edition, and I was persuaded to sign a whole bunch of copies, so if you want one they are available from some vendors specializing in signed first editions of crime fiction on the Web. (UK first editions of TGWTDT were going for $1000 and up, unsigned.)

Both Tiina and I are looking forward to Left Coast Crime in L.A. in March, and next year's Bouchercon in San Francisco. It will be gratifying to return home to the Bay Area with some translation successes to show for all my years away.